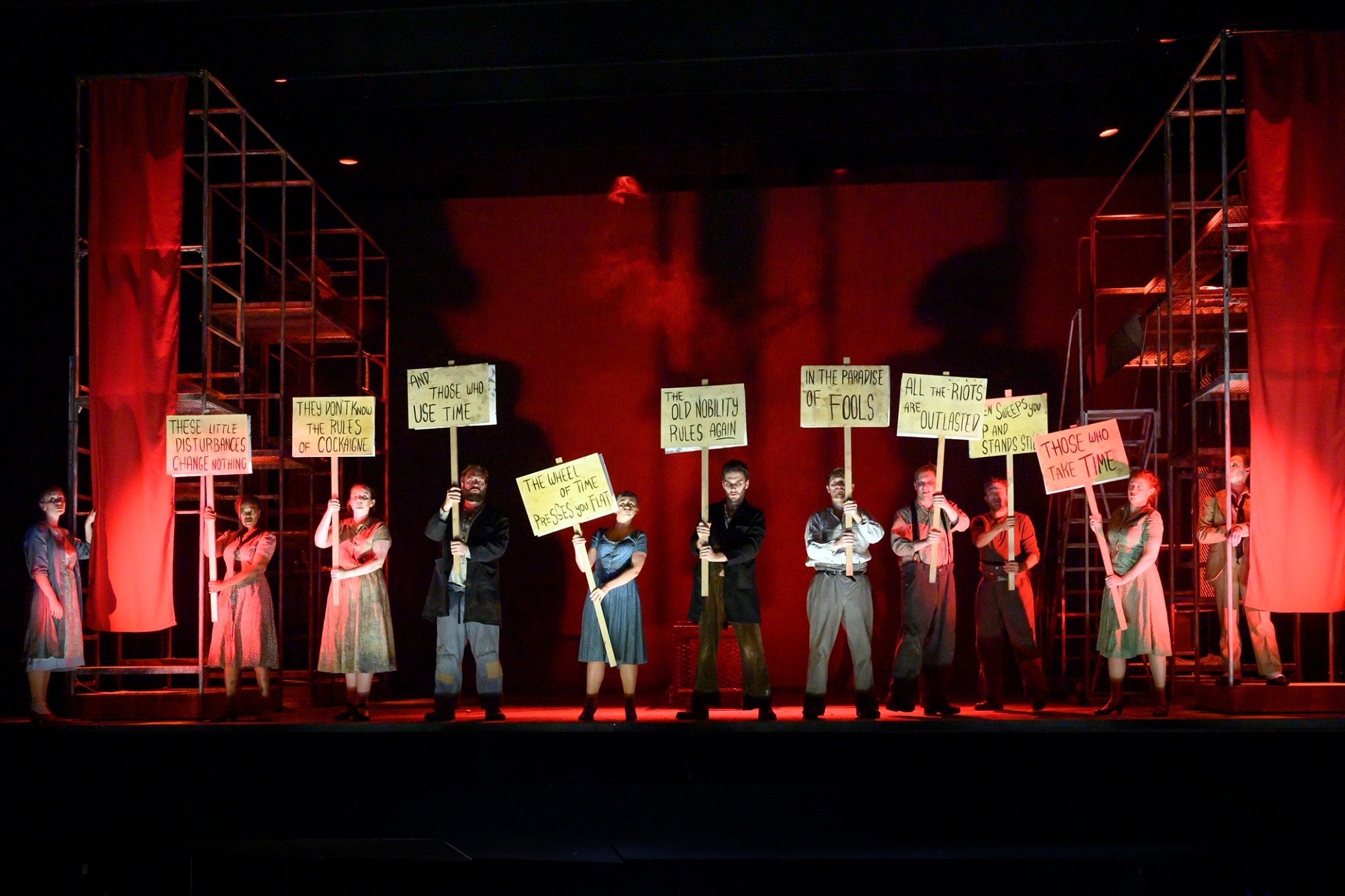 A poetic night at the Buxton Opera House

Jeremy Bartys, a participant from Streetwise Opera’s Nottingham group, writes about one of our performances in English Touring Opera’s production of The Silver Lake – A Winter’s Tale (Der Silbersee):

With mind-boggling head-spinning flowery patterned walls, and a gigantic enormous opera singing professional man, complete with beard and glasses, standing high above us on a chair against flowery patterned wallpaper, towering over at 40 performers at least very scary as he shouts and yells about redemption of potty pineapples, in a very claustrophobic tight space. Not enough room to swing a cat or a brass band orchestra.

From flickering demonic haunting lightbulb moments in canteens, where hungry Streetwise performers from Nottingham enjoyed a lovely chilli con carne and fish and chips, don’t forget mushy peas, sorry John Boy, no lasagne on menu for you, old chum. To crates of king Edward potatoes and Del Monte tropical pineapples, in a very gold glitzy glistening opera house in Buxton, if only the Theatre Royal had that much gold.

The pre-show nerves and fluttering butterflies tension and stage fright, got the better of one Streetwise Nottingham performer, so abracadabra as if by magic he turned into an audience member and went behind the scenes to see Silver Lake in the making.

From an audience members point of view on stage and behind the curtain scenery, it was all very technical and hands on never a dull moment behind the scenes of a theatre curtain at Buxton Opera House.

The Silver Lake was slowly and surely being put together piece by piece, prop by prop. While professional singers and actors from the English Touring Opera rehearsed their winning lines, tinkered and twittered on mobile phones, while stage hands ran round on and off the stage like headless chickens on the run, even the old conductor of the brass orchestra was bouncing up and down, he must have been excited.

Even some professionals from English Touring Opera took time out before the show, to watch a bit of Strictly Dancing. Never a dull moment with the ETO.

From last minute prepping potatoes to slicing juicy pineapples in halve, without losing any actors or actresses’ fingers, to actors and actresses swinging like trapeze artists on and off metal scaffolding, no wonder the English Touring Opera has to say ‘Break a leg’ before Act 1 begins.

Over in backstage, tightly squeezed men and ladies dressing rooms, it looked like Streetwise Nottingham performers were preparing for a very cruel harsh winter and a bit of snow on stage. They were layered and suited and booted snug as bugs in rugs, with lots of old fashioned clothes from wartime Primark in Germany. Certainly keeping them warm and cosy, on an autumnal Saturday evening.

Unfortunately nobody had ordered me a Count Dracula costume from 1933, so on this occasion a horrifying Halloween Opera was off the menu, sob sob sob!

So the audience settled down for a good old fashioned German/English Silver Lake operatic performance.

With the aid and help of endless rolls of silvery tin foil, and an all star cast from Streetwise Opera Nottingham: Jim Kevin Paul Simon John x2 Clive Rubin Gary Adam Diane Caroline Wizard the Amy Wendy Jenny Annie Natalie Barbara Freda and Donald were all wrapped up with rather a lot of tin foil, the only thing sticking out of the tin foil was their heads, very bizarre and weird. The Silvery Lake was finally created on stage.

Many many thanks to the English Touring Opera, for funding this performance alongside Streetwise Opera, and letting us share their very small theatre stage. The Silver Lake has been performed at London, Buxton Derbyshire and Durham, and is travelling next on the road to perform at Bath, Snape Maltings, Saffron Walden, Lancaster and Exeter, all before December.

Gosh, very busy stuff for English Touring Opera, from Nottingham we all wish them the best of luck in their next performances.

It’s a shame the Silver Lake couldn’t flow into Theatre Royal Nottingham, but watch this space, we may see the English Touring Opera on a Nottingham stage in the not too distant future .

Many thanks to Remarkable Rob (Mr Lightbulb Moment) who feeds photocopies and hands out business cards in his spare time, when not on stage talking all things German opera and encouraging performers to deliver their ultimate best. What a fine jolly chap our Rob is, give him a huge round of applause.

A round of applause also for Marvellous Mark and Magnificent Marigold, Victoria and Miss Streetwise Values Melanie, for supporting the Streetwise troops, guiding us on a remarkable journey throughout rehearsals and performance of the Silver Lake.

Many thanks to the bus driver with the diesel leaking bus, for getting us to Buxton and Nottingham in one piece.
Let’s hope the driver managed to soak up all his lost diesel, and return himself and the bus home safe and sound.

A final thank you to Nutty Neil and Three Tenor Timothy, missing all the action in Buxton but with us all the way in hearty spirit. They had been abducted by aliens onto a different theatre stage for one night only, but we thank them from the bottom of our hearts to the tops of our lungs for guiding and supporting us through rehearsals of the Silver Lake.

Hip hooray hip hooray! Streetwise Opera Nottingham Performers should all give themselves a huge patty on the back, and a big round of applause for putting on a spectacular amazing remarkable fantastic show!