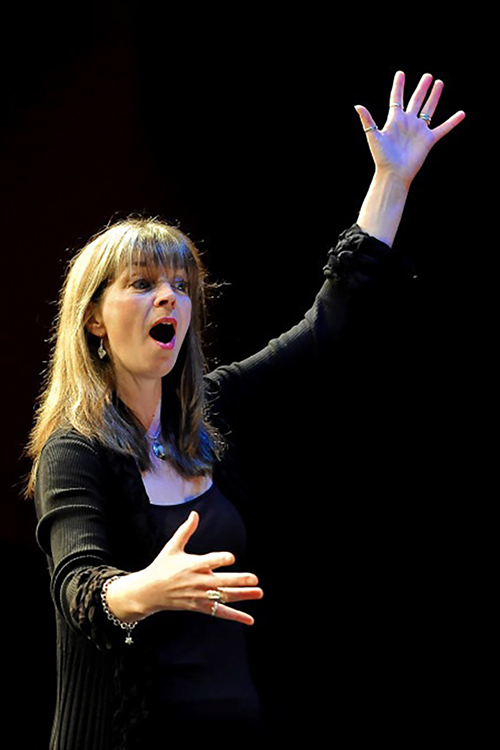 Led by Em Whitfield Brooks, this chorus was put together specifically for After Winter, with members of several amateur choirs from North Yorkshire.

Em Whitfield Brooks works with professionals, amateurs, individuals and groups of all sizes, ages and abilities, from all backgrounds and across all sectors. Her quest, using elements of theatre, music, voice, mindfulness and performance, is to bring learning, presence and joy to the search for personal liberation.

With a background in street theatre, straight theatre, music, circus and clowning Em has a Drama degree (2:1) from Hull University, and trained at Fool Time, the UK’s first circus school in Bristol in 1988, where she co-devised and led its children’s workshop programme. She later toured with Snapdragon Circus before moving north and focusing on voice, singing jazz and playing in bands.

Em trained with a variety of singers and vocal explorers; from classical singing to the ‘total’ approach of Czech singer Ida Kelarova via the inspiring Helen Chadwick, Venice Manley, Frankie Armstrong and Cicely Berry as well voice/theatre improviser Guy Dartnell, She still sings with The Ruby Larks.

Em founded and led three community choirs Ellacapella, ‘York’s first female blues choir’, 1990-’95, Voicebox 2000-’07, and Helmsley Community Choir, 2011- 16, and has also led Global Voices for Stephen Joseph Theatre 2010 -11, the Chorus for Opera North’s 2010 Bridlington project, and was the first conductor of Hull Freedom Chorus, for Hull City Arts, with whom she enjoys a regular ongoing connection. She has led this massed group of singers performing new pieces in unusual venues at every Freedom Festival since 2011; she performed with them at Hull Jazz 2018, and conducted the Freedom Chorus at the launch of 2017 UK City of Culture with a 150-strong performance of Caravan of Love

From 2000 Em was founder director of the inclusive Ryedale Festival Community Opera, which produced mainly new operas annually for 14 years and reached many thousands of people. She continues to work as chorus leader with pioneering teams creating new participant-led performances in diverse communities and Calderland, produced by 509 Arts, won the Royal Philharmonic Society Award for Learning & Participation in 2017. Em led the singers and co-directed the 1940s punk-pop circus opera Back to Bransholme produced by Back to Ours, performed in the car park of North Point Shopping Centre on the Bransholme estate, Hull, in October 2019.