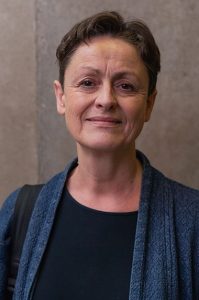 Cathy Graham OBE is stepping down after ten years as Chair of the Board of Trustees at Streetwise Opera.

During Cathy’s time as Chair, Streetwise Opera has delivered hundreds of workshops in person and online, supporting hundreds of people who’ve experienced homelessness. Cathy has guided the organisation – its dedicated and talented staff and its highly committed Board – through a time of rich and intense activity which has seen involvement with the Cultural Olympiad, and the raising of millions of pounds for critically-acclaimed national productions and international projects in partnership with the Royal Opera House, English National Opera, Sage Gateshead, The Sixteen, The Passage, the Gulbenkian Foundation, the British Council and the BBC.

Cathy also gave firm direction to Streetwise Opera during the incubation of a global arts and homelessness movement, With One Voice, and its creation as a separate charity, Arts and Homelessness International.

Rachel Engel, Vice-Chair of the Board, said:

“Cathy’s eye for detail and unwavering laser focus on the task at hand are an absolutel marvel. We are especially grateful for Cathy staying longer than anticipated; her expertise and leadership during the pandemic was invaluable and, as a result of this, we are now ready for an exciting chapter, under new executive and artistic leadership and with a bright future ahead.”

Cathy is Director of Music at the British Council, and has served on many boards during her career, including that of ISPA, the International Society for Performing Arts, and is currently on the Artistic Advisory Committee of Uppsala Concert and Conference Centre in Sweden. She has been awarded an Honorary Membership to the Royal Northern College of Music (2018) and the Association of British Orchestras ABO Award (2019), and in 2022 she received the honour of OBE (Officer of the Order of the British Empire), as part of Her Majesty Queen’s Birthday Honours list, for services to music and cultural relations.