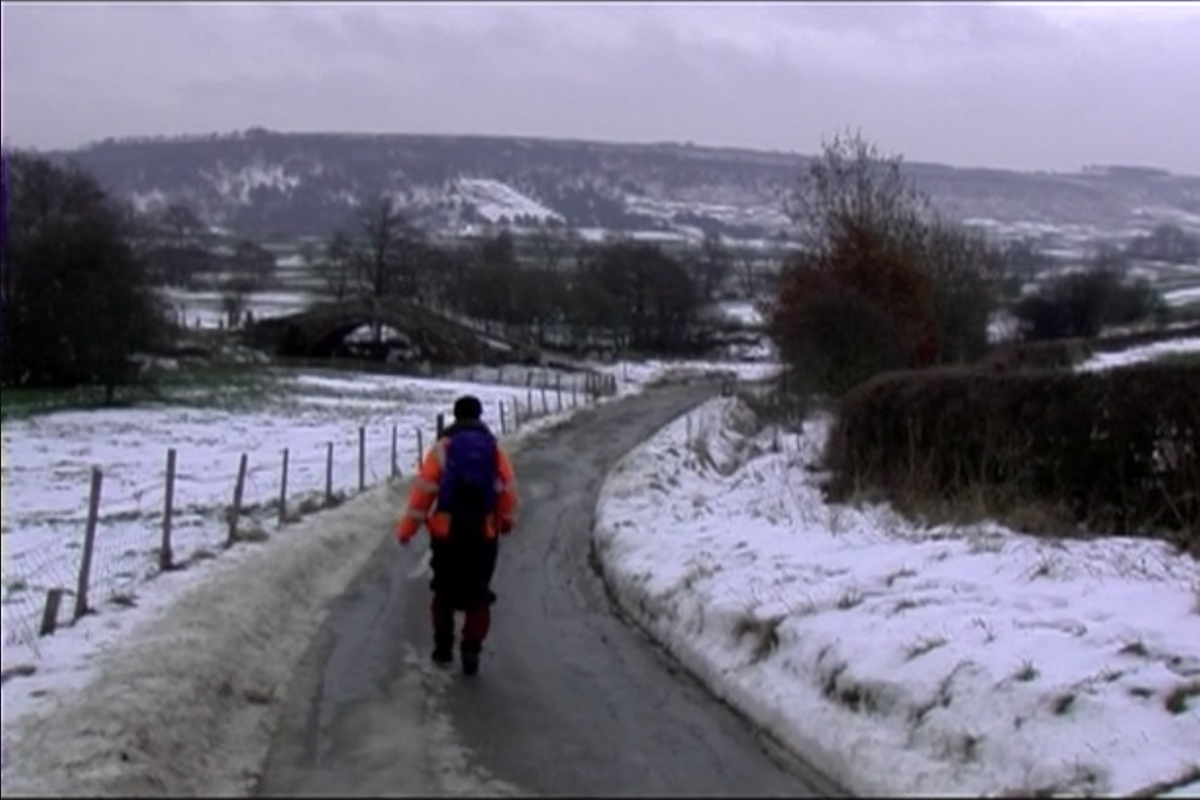 Winter Journey Coast to Coast: I am pulled in from the start

In January 2004, tenor David Pisaro embarked on an arduous 200-mile journey across Northern England, from St Bees in Cumbria to Robin Hood’s Bay on the Yorkshire coast. He walked up to twenty miles each day across the bitter January landscape, and each evening performed parts of Schubert’s song cycle Winterreise. This film is a perfect homage to the work; a young man makes a winter journey, after losing the girl he loves.  David fully inhabits the character throughout his odyssey, empathizing with our lovelorn wanderer; I am pulled in from the start.

Franz Schubert composed Winterreise,  Winter Journey, towards the end of his short life. It is a cycle of 24 songs, based on poems by Wilhelm Müller. The wanderer begins his journey through the unforgiving winter landscape, dealing with his anguish at losing his great love, but also I think in search for his own identity and the meaning of life. Schubert himself describes the work as “a cycle of terrible songs.” He created them while he was dying, riddled with Syphilis. But Schubert himself did not see the work in its darkest terms alone. He said: “The songs pleased me more than all the rest and, in time, they will please you as well.” It is no surprise at all to me that this work was much admired by Irish genius Samuel Beckett, a poet not given to joviality, no doubt appreciating the light and shadow.

Throughout the film, the profound “aloneness” of the traveller is stark and captured by the filmmaker’s skill. We see a tiny figure making his way across the vast barren steppe. There are beautiful mist-laden shots, which give an ethereal, dreamlike quality.

We’re in Ennerdale. I am moved by the phrase:

He dreams of summer meadows and bird song, but awakes to bone-chilling cold and darkness and the shrieking of ravens, windowpanes painted with frosted leaves. While he dreams of winter flowers, I see an optimism burning beneath. He is angry with his own tears, which are only lukewarm and cannot melt the snow.  In “Erstarrung” (Frozen), he searches in vain for her footsteps in the snow, and so he is left with no visual memory of her. Still, she remains frozen in his heart. The cold snow sucks up his tears, which will melt into a brook which will flow to the town where his sweetheart lives. We come upon a Wensleydale farmer, who makes me smile when he deems David “a mournful bugger!” I feel pleased to be in my home county of Yorkshire which, as everyone knows, is on the right side of t’Pennines!

I can acutely feel David’s struggle, against the cold and the isolation, as he fights thinking too much “about the worst things”. I’m sure that he is at one with the protagonist, who wonders: “What foolish desire drives me into the wasteland.”! Quentin Thomas, his superb piano accompanist, walks with him for a few miles, and he is glad of the company. We are so close to nature, and as I look at the horizon, I feel a sense of eternity.

The wanderer sees three suns in the heavens, but says they are not for him and he turns away. He cannot allow himself to feel their warmth. My eyes fill with tears over his desolation.  There is a beautiful shot of a church, the stained glass lighting up the darkness.

And so we come to “Der Lindenbaum” (The Linden Tree). It is possibly the most lyrical song and is utterly beautiful. David gives an absolutely stunning and heartbreaking rendition. The tree is a reminder of happier times. It calls to him, promising him rest. But he turns away into the cold wind. Even in the darkness, he has to close his eyes. And still he hears the tree calling, miles behind him: “You’ll find your peace in me; you’ll find your peace in me.” The beautiful piano is the rustling of the leaves. David’s singing has a warmth and intensity that I believe would not have been there, had it not been during this what seems to me a very personal journey. His voice is affecting and haunting. And I’m crying again.

David and his wife Emily Smith have recently guided Streetwise Opera performers in online workshops. With Genesis Sixteen, Brodsky Quartet and Roddy Williams, they worked with Streetwise Opera to create a very special film of The Linden Tree. Streetwise Opera is a wonderful organization which uses music to enhance the lives of people affected by homelessness.

A carrion crow flies above our forlorn vagabond. It reminds me of the albatross, in Coleridge’s Ancient Mariner. He sings: “My journey will not take me much further”, and craves death and its certainty. The mariner is also

” Alone. Alone. All, all alone.
Alone on a wide, wide sea;
And never a soul took pity on
My soul in agony.”

The spectacular beauty of the snow-covered hills belies the current of despair and melancholy in the music. There is a wonderful shot of David’s shadow, as the sun hits the snow from above him. Throughout the film, the photography is wonderful. This is a story of a mental breakdown, as the traveller rails against his own anguished plight. Snow is piled high on the roadsides. David arrives late at Stokesly. He is palpably dispirited and exhausted and has to abandon tonight’s concert, unable to sing. I have found myself willing him on. It is astonishing to me that David is walking so many miles through bitter weather – and then dons his smart jacket to perform each evening.

I hear a beautiful folk song in the background. The film features three new songs : “Goodnight”, “When the Night Comes” and “Love Will Come”. They were written and  beautifully performed by David’s brother-in-law’s band, Oskar, inspired by Winterreise. They are now called “Society of Imaginary Friends”, which I think is a cracking name; some of my best friends are imaginary… Our traveller longs to return and stand in front of the house of his love. He is trying to rid himself of her, but he fails. With each step he grows closer to her; his thoughts are full of her. I note that Schubert has used mainly minor keys, and so making a plaintive sound.

David arrives at Bolton Village. There is a stunning pink sky at twilight. I have a little light relief as some men struggle down the road transporting a piano, though we are a long way from the high comedy of Laurel and Hardy’s exploits with a piano!

Our traveller has a vision of a bright home, with a loving wife, but the stark reality makes his plight even more heartbreaking. He constantly seeks peace and finds none: “I must travel a road where no one has ever yet returned.” His fate looks bleak.  But he summons up some courage, shaking the snow from his face, and strides into the world, against the perishing wind. “If there’s no God on earth, then we ourselves are gods.” As for me, I find myself hoping that God is near, and indeed standing by his side in his wretchedness.

We come to Der Leiermann (The Hurdy-Gurdy Man), who plays with his frozen fingers. No one wants to hear him. The dogs snarl at him and his begging bowl is empty, but he just lets the world go by. The traveller sings: “Will you grind you music to my song?” The hurdy-gurdy man is an embodiment of loneliness. He is forsaken by all, eking out his bare existence on the outskirts of the town. I feel much compassion for him and one would think that “There but for the grace of God go I.” My heart aches for his plight. I cry quietly. He puts me in mind of Bob Dylan’s Mr Tambourine Man: “Play a song for me. In your jingle jangle morning, I’ll come following you!”

I begin to see that our traveller has not yet completely fallen into abject despair. Perhaps this is a tale of endurance; he does not give up, and at the end of the song cycle his journey continues. And the hurdy-gurdy man “turns his handle, and his hurdy-gurdy is never still”. Our wayfarer continues on, forever searching for himself and the meaning of his existence. There is a spiritual exhilaration, as he revels in the poet’s imagery of fire and snow, heat and ice. I contemplate that life is a quest for answers that are impossible to find. I have been bowled over by the courage and commitment that David has shown , completing this incredibly gruelling task. I was gripped , pulled in throughout.  His singing was beautiful, affecting and sublime, as he became Schubert’s traveller on his journey. I felt privileged to tag along.

I can see the lovely houses piled on the hillsides of Robin Hood’s Bay. There is a very wonderful shot of David’s wife Emily, running towards him and embracing him. Their joy is fine to see and it warms my heart. I feel very, very glad that David, unlike our desolate journeyman, gets the girl in the end!